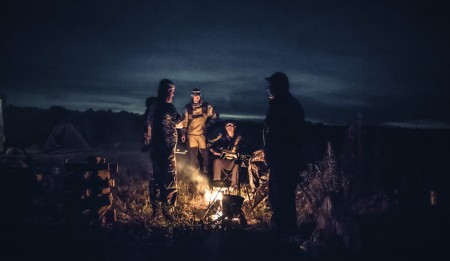 While on a weeks’ vacation from Kroger where I worked during the summer of 1978, I got a few friends together to go camping at a state campground just south of Traverse City, Michigan.  I was 19 years old then and was able to borrow one of mom and dad’s cars, a 1965 Ford Galaxy, that we mainly used to carry a small aluminum rowboat by strapping it to the roof. The dark green paint was scratched and faded, and the body was being eaten up by rust.

We loaded the car with tents and other camping gear, packed a couple of coolers full of food and beer, and headed to the campground located on the Boardman River. I was looking forward to a week of fun and relaxation from work and the city.

Because the hot summer sun melted most of the ice keeping the food cold, we would have to make a run to a nearby store for more ice daily. The roads near the campground were dirt with a lot of ruts and bumps in them so, during one of these ice runs, I hit a large hole and it caused the rusted frame to break under the passenger side door.  The frame on this car was basically a 4-inch square tube made of steel about 4 millimeters thick.  So, with the frame broke in half on the passenger side, I slowly dragged it back to where we were camping.

After climbing under the car and surveying the issue I thought I had a solution, but I would need a couple of key items. I walked into the woods and found a piece of a tree branch that was about 2 feet long and about 3 inches in diameter.  I then went back to the car hoping to find the next key item in the trunk.  I was looking for some cord or wire.  When I opened the trunk, the only thing in there besides a spare tire and jack was a single wire hanger.  Now why there was a single wire hanger in the trunk I do not know but it was just the bit of luck I needed.  I straightened the wire hanger and climbed back under the car.  I shoved the tree branch into one side of the broken tubular frame and then slid the other end of the branch into the other side of the frame tying it all together using the wire hanger.  It held together and we continued using it on our daily ice runs till the end of our trip, but the fun did not end there.

After the camping trip, we headed back home which was also on a dirt road in Traverse City.  While pulling into the driveway, there was a bump caused by road graders smoothing the road. I hit the bump and the rusty muffler broke apart where it connected to the tailpipe.  I went into the house and found an empty Mello Yellow can, cut the ends out, and cut it down the side to make a wrap.  Using a couple of hose clamps, we had on hand I was able to clamp the muffler back to the tailpipe.

That car ran for a few more years with a small log holding the frame together and a Mellow Yellow can to hold the muffler and exhaust together... and dad never knew.