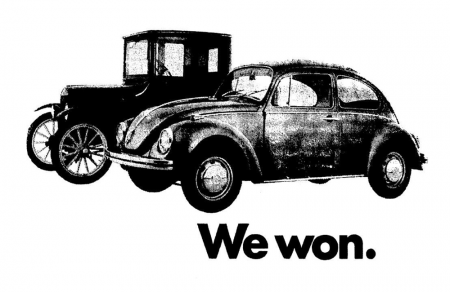 Introduced in 1908, the Ford Model T held the record for the best selling car of all time for the 45 years following the end of its production in 1927. That record was finally overtaken on this day in 1972 when the 15,007,034th Volkswagen Type 1 Beetle left the factory. Developed in Nazi Germany by Dr. Ferdinand Porsche in the 1930s, the Beetle would go into full scale production following WWII.

Dismal US sales led to a massive marketing campaign launched in 1959 by advertising agency Doyle Dane Bernbach to promote the advantages of the small car. The Bug, as it is informally known, underwent very little redesign throughout its production life. After more than 60 years and more than 21 million Beetles built, the final Type 1 rolled off the assembly line in Peubla, Mexico in 2003.