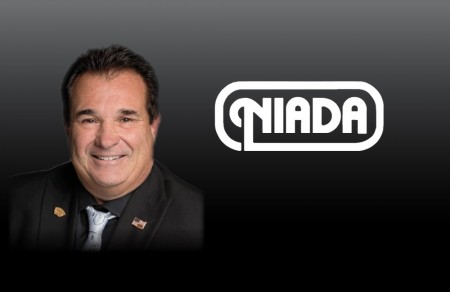 If you don’t know where Lou Tedeschi is from, you’ll figure it out when he opens his mouth. “I’m from the heart of Boston,” NIADA’s new president said. “Funny how people recognize that immediately – as soon as I start talking.” You can’t miss the accent, nor his passion for serving independent dealers and the used vehicle industry.

Tedeschi, president of A.S.P.I. Motor Cars in Dedham, Mass., has long been a driving force of both the Massachusetts/New England IADA and the national association. He’s served multiple terms as MIADA president and has been on NIADA’s board of directors since 2011, serving as secretary, treasurer, regional vice president, senior vice president and president-elect. He’s also a longtime car guy, though working in the industry was not his original plan. Tedeschi went to Boston’s Wentworth Institute of Technology to learn the construction industry, then studied to be an electrician. But he was always tinkering with cars, and one of them – a 1973 Hurst/ Olds – led him into the car business. “I spent my last dime on that car when I bought it,” he said. “My brother had a brand new Oldsmobile and I always wanted one.” But the car was stolen while it was in the shop. It was recovered, but there was damage and a three-year battle over whose insurance would cover it.

Meanwhile, Tedeschi went to work restoring the Hurst/Olds, and in the process he went to a local Oldsmobile dealer to get some parts. Realizing the young Tedeschi’s potential as a mechanic, the dealer, George Berejik, offered him a job. Tedeschi accepted and worked his way through college fixing cars, earning the designation of GM master technician along the way. In 1985, after five years at the dealership, the 22-year-old left to go out on his own, opening a gas station. “I was like everybody else starting a business,” he recalled. “You think you’re going to make a million dollars when you first open up, and I don’t think I took a paycheck the whole first year.”

In 1987, he and brother-in-law Tony Venuto went into business doing vehicle service and restoring and selling classic muscle cars. Eventually Tedeschi got a dealer’s license and expanded the sales operation, creating Automotive Service Plus Inc. Today A.S.P.I. sells 15-20 cars a month, as well as specialty vehicles – “dump trucks, custom trucks and that type of thing,” Tedeschi said. Vehicle service is still 50 percent of the business. “I’ve always been kind of the small guy who runs like a big dealership,” he said. “My biggest thing is not the volume, but the net profit of what we sell. “I don’t have to do as many cars a month as some of the big guys. Those guys get eaten up by their overhead and that’s just not me.”

What does being NIADA president mean to you? It’s important to me because of where I came from as a first generation dealer and a small dealer. As president of the association, I’m representing the group that makes up 70-80 percent of our membership – the dealers selling five to 20 cars a month. I think that’s hugely important to make sure the smaller guys have that representation. The reason I came up in the ranks as quickly as I did is that I speak “dealer.” I understand what the challenges are for the small guys and the first-generation guys who had to build it for themselves. Most people who join NIADA don’t get actively involved in association leadership, especially at the national level.

Why did you choose to take on a leadership role? My theory has always been very simple. You can’t complain about something unless you’re willing to get involved and change it. Guys would come up to me at the auction when I was president of the local association and say, hey, how come you haven’t done this or that? I’d say, “How come you aren’t a member of the board of directors?” They’d look at me like, what are you talking about? I’d tell them, “You’re sitting here complaining to me about all these things we haven’t done. We don’t get paid for this job. Instead of screaming about it, get involved and help us change it.”

How has NIADA helped your business? NIADA helped me become more professional. Your customers’ first impression when they walk into the dealership might be their last if you don’t give the right first impression. So just improving the professionalism of the business is a big thing. I look at NIADA as the Better Business Bureau of our industry. We have a Code of Ethics that’s adapted to our industry and dealers. It adds professionalism to our industry to make sure you do things right. We see way too many guys in this business do things the wrong way and get themselves in trouble.

What advice would you give new dealers just starting out in the industry? If you’re starting fresh, don’t be the guy who wants to be the biggest dealer in the area right away. If you grow too fast you can shoot yourself in the foot, because the overhead will eat you up. You want to be the best guy in the area, not the biggest. Make sure you’re making money. Don’t get in the business just to move cars so you can say, “I do 100 cars a month.” Because if you’re not making money by moving 100 cars a month, you’re doing yourself and your family a disservice. The best advice I can give is stay up to date. Don’t get lost in the weeds. A great place to get up to date is the NIADA Convention. I always tell dealers, “If you come to the national convention and you can’t find something worth double what you’re paying to be there, you’re not doing your job.” And after they’ve been, every single one of them tells me, “You’re right. I saved money on my website,” or,” I saved money on advertising,” or, “I was able to buy a product I couldn’t find at home.” That’s what it’s all about. We’re here to help you.

What is your vision for NIADA? Our base dealer – the vast majority of our membership – is the dealer selling five to 20 cars a month. I don’t want them to feel like NIADA is catering to the 20 percent, who can go to 20 Groups and take advantage of all the education we have available. My goal is to make all that available to all of our members. In order to do that, we need to make things more affordable. That’s my priority for the next year – to try to make NIADA’s programs more affordable to the average dealer. We have to recognize who our membership is and adapt the association to our membership.

What do you want members to remember about you or your term when it’s over? That I’m approachable. And that goes for the entire board. I want to make sure our dealers know if they have an issue with something, they can come see us and we’ll try to take care of them. What is the biggest issue facing dealers and the used vehicle industry today? We’re all having a huge issue with inventory. We just can’t get it. I’ve been buying off the street more than I’ve been buying at the sales. The business is going to change after COVID. I’m not sure a lot of the auctions are going to reopen the lanes. They’re realizing they can make a lot of money electronically. They’re selling cars for more money – some dealers are paying retail prices for them – so a small guy who used to go to the auction and buy those cars is having a very hard time sourcing inventory.

How have the used vehicle industry and independent dealers come through the COVID-19 pandemic, and what do you expect going forward? The guys who have inventory are killing it right now. They’re selling what they have. But what’s happening is similar to what happened during Cash for Clunkers – we’re starting to see the effect of inventory going down. I think we’re in for a long road. And I think what happens in the Presidential election is going to really decide where we’re going to end up.

What can members and the national and state associations do together to strengthen the used motor vehicle industry? I’d like to see a program to advertise for members. We’ve got to build membership. That’s a big thing. We have to have more profit centers available for dealers so they can come to our Convention and go home with something they can make money with. We’re going to work with the states to put NIADA’s member benefits out there. States should use the NIADA benefits to their advantage.