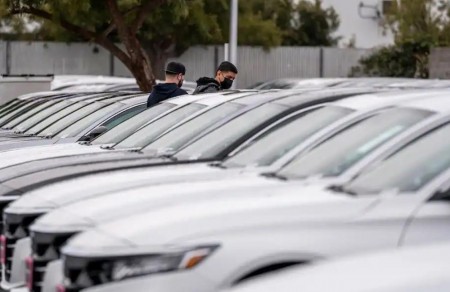 When the coronavirus pandemic upended automobile supply chains last year, Darla Booher feared for Deal Depot, her used-car dealership in Greer, S.C. But Booher was surprised by what happened as supply constraints forced her to raise prices for Chevrolet Impalas or Ford Escapes: Buyers kept coming.

“A lot of people got their tax refunds and stimulus money back-to-back,” Booher, 63, said of the massive coronavirus relief passed a year ago. “There was demand and a shortfall of inventory at the same time … and that started to drive the prices up.”

What’s happened at places like Deal Depot and other dealers shows why some top economists and Wall Street investors are concerned that the $1.9 trillion stimulus President Biden signed into law last week could spur a risky cycle of rising prices across the whole economy. Nationwide, used-car prices soared 17 percent nationally in seven months last year — the most of any product.

Now, as $1,400 stimulus checks begin to post to Americans’ bank accounts this weekend — and more than a trillion dollars of additional aid will soon be released — some fear that too much cash could overstimulate the economy altogether and trigger the kind of inflation the United States hasn’t seen in decades.

But the story of America’s used-car market also helps explain why the White House and Federal Reserve Chair Jerome H. Powell, who is charged with guarding against excessive inflation, insist the economy can absorb all that money without suffering a hard-to-control bout of inflation.

It’s a big bet — one that pits the hope that the American economy can rapidly return to full strength against the risk that the economy will overheat and the Fed will have to quickly raise interest rates, causing a new recession.

After zooming higher last year, the price of used cars has fallen a bit from its late-summer peak. Similar stories go for other goods and services: Home values soared, while rent in some big cities fell. The cost of food jumped, but the price of clothing declined.

“Inflation is actually a very complicated beast, and I think you’re going to hear, over the next 12 months, Jay Powell reference a lot of different prices,” said Skanda Amarnath, research director at Employ America, a left-leaning think tank that advocates for the Fed to let the economy run hot. “There’s the health-care dynamic, used-cars dynamic, airfare dynamic, lodging dynamic and apparel dynamic. And all these things work in different directions.”

All told, the consumer price index, which measures inflation, has tracked well below 2 percent — the Fed’s target rate. And while the influx of more federal cash may push up demand for certain products, and cause overall inflation to creep above 2 percent, Fed officials say there’s no reason to expect prices will spiral out of control. Indeed, if inflation is to average 2 percent in the longer run, it would need to exceed 2 percent for some time to make up for long periods of slower price growth.

“I really do not expect that we’ll be in a situation where inflation rises to troubling levels,” Powell told lawmakers last month. “This is not a problem for this time, as near as I can figure, and if it does turn out to be, then we do have the tools we need.”

Since the pandemic began, used cars and trucks have seen the fastest price growth of almost any category of consumer goods, according data from the Bureau of Economic Analysis. The only categories that rival them are major household appliances and “flowers, seeds and potted plants,” both of which have seen prices rise more than 10 percent between February of 2020 and this January.

So far, the sharp increases in these pandemic-popular segments have been offset by even sharper declines in the cost of categories most affected by covid 19-related travel restrictions, such as international airfare (down 28 percent from February of last year to this January) and spectator sports (down 18 percent).

In Durham, N.C., Michael Darrow, 56, watched used-car prices tank at the beginning of the pandemic. Darrow owns The Auto Finders, the 25-year-old business he runs with his wife, son and a handful of other employees.

But as states reopened, dealers scrambled to restock their lots. Darrow said wholesale prices appreciated 2 percent each week through May and June — “hard to believe on a used car.” Prices evened out through late summer and fall, then jumped about 1.5 percent each week by the end of 2020, he said.

Business owners like Darrow say they there isn’t much room to raise retail prices beyond what they’re paying at auction. The supply chain for new cars has been constrained by factory shutdowns and ongoing precautions to keep workers safe. And that, in turn, is pinching the used-car market, which relies heavily on trade-ins and auto parts. A global microchip shortage is bungling supply chains even more.

All told, it’s more expensive for dealers to repair and source their models, on top of the added cost of staying open in a pandemic.

Darrow doesn’t think the price increases he’s seeing can be sustained for long. Shoppers know the value of a car, Darrow said. Sometimes he wonders how long dealers will be able to pass on higher prices for cars and trucks before their customers walk away.

“I’m scratching my head asking my buddies, ‘what are you going to do with that? How can you spend that kind of money, and then expect customers to pay more than what it’s worth?’" Darrow said.

It’s that kind of worry that has economists trying to pin down what actually constitutes inflation, how much is too much, and how long prices could rise before the Federal Reserve intervenes.

In the 1970s and early 1980s, inflation was a scourge on American life; it was normal for prices on everything from cookies to coal to rise 10 percent or more every year. Former Fed chair Paul Volcker famously responded by hoisting interest rates, triggering a recession but ultimately breaking inflation’s back.

Now some economists worry about that cycle repeating.

“If inflation were to take off, there would be two scenarios: one in which the Fed would let inflation increase, perhaps substantially, and another — more likely — in which the Fed would tighten monetary policy, perhaps again substantially,” wrote Olivier Blanchard, a former top economist at the International Monetary Fund and a senior fellow at the Peterson Institute for International Economics, last month. “Neither of these two scenarios is ideal.”

Lawmakers, too, have warned against so much fiscal spending while parts of the economic recovery have picked up faster than expected and vaccines become more widespread.

“Our economy is growing very powerfully,” Sen. Patrick J. Toomey (R-Pa.) told Powell in a congressional hearing last month. “There’s also a real danger that we have overheating in places that lead to unwanted inflation, and I think the data is increasingly pointing in that direction.”

Meanwhile, Wall Street is betting on a rapidly improving economy. Bond yields have risen sharply over the last month, with the 10-year Treasury yield jumping to its highest level in more than a year on Friday. Some investors see that as evidence that inflation is likely to materialize.

Powell, for his part, continues to assure investors that the Fed won’t raise rates until there’s substantial progress in the labor market and inflation is on track to meet and exceed the Fed’s 2 percent target. As for the bond market, Powell told the Wall Street Journal this month that he’d be concerned by “disorderly conditions in markets or by a persistent tightening in financial conditions broadly.”

Powell and other economists also say it’s not useful to compare inflation dynamics of the past with today’s. The economy has changed so much since the 1970s and 1980s, they say, with globalization, technology and other forces combining to slow price growth.

A more globalized economy made it harder for businesses to raise wages or prices, since competitors and consumers could easily find a cheaper place to make a good or deliver a service. More advanced technology only quickened that shift.

For years now, inflation has fallen short of the Fed’s 2 percent target, even as the unemployment rate ticked lower and lower after the Great Recession. That reality spurred the Fed to reevaluate the connection between a tight labor market and rising prices. Economists had long believed that, as the labor market tightened and employers raised wages to compete for scarce workers, prices would rise as businesses passed high labor costs onto consumers. But such a relationship largely failed to materialize during the most recent expansion — the longest in U.S. history.

The Fed ultimately came away with a new framework that lets the labor force run hotter for longer. The central bank will tolerate some temporary inflation over 2 percent. And it won’t raise interest rates until there’s been major progress in the labor market.

But there are still plenty of questions about how that model will be put into practice. In the months and years to come, Fed leaders will have to clearly and openly distinguish between temporary pops in prices and more persistent inflationary trends.

“The real challenge for Powell is communication,” Amarnath, of Employ America, said. “It’s about to get really messy. It’s already getting messy right now.”

Even now, many auto experts don’t consider the past year’s price increases to be a sign of textbook-definition inflation.

Wholesale and retail prices were rising well before the pandemic, industry analysts say. Americans generally prefer SUVs and trucks that come with higher price tags. “Infotainment” technology behind the dashboards, plus entertainment systems in newer models, have pushed prices up. Parts shortages or other supply chain issues might cause dealers to prioritize their most-profitable models, said Peter Nagle, an automotive industry expert at IHS Markit.

Nagle said he doesn’t expect the latest stimulus will notably increase demand for cars. A $1,400 stimulus check, for example, will help many families. But it might cover only a few monthly payments on a car — not enough to drive the shopping habits of buyers in the long term.

At the same time, low interest rates have helped car buyers take advantage of easy credit policies, which Nagle said could go away if the Fed decides it has to raise rates.

“To the extent those rates and inflation drives changes in lending rates, I’m concerned about that, if it moves quickly,” Nagle said.

Those concerns haven’t hit Harrison Santini, who bought his 2015 Buick Encore in May for $11,400.

Santini, 22, said he had no trouble getting approved for a loan and used part of his stimulus check from last spring for the down payment. Santini works one job in Biloxi, Miss., and another in Mobile, Ala. He said he’d be in trouble if his car broke down or he had to miss work for repairs.

Santini has put 22,000 miles on his car in 10 months, which would normally reduce its value. Instead, Santini is marveling at how his car’s value has actually gone up. Now he’s looking to trade in his Buick.

“I find it shocking how much the market has changed within such a short period of time,” Santini said. “I qualify for the $1,400 [stimulus check], and I’m like, ‘heck yes, that’s going straight down to a new deposit.’”